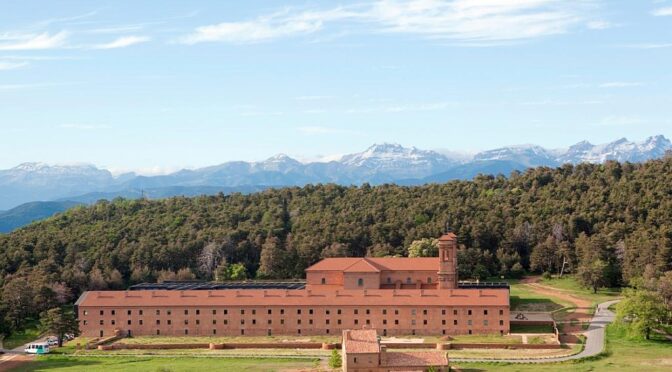 In 1920 the place where the monastery is located was declared a Natural Site of National Interest, being one of the first to obtain this declaration in Spain. In Aragón it has been defined as a protected landscape since January 23, 2007 and it is also a SCI and ZEPA .

The Peña Oroel can be divided into two main formations: the Sierra de San Juan de la Peña, with a maximum altitude of 1550 meters above sea level, and Mount Oroel, which reaches 1770 meters. The conglomerates stand out, sedimentary rocks of the detrital type formed by bouldersand containing ridges and escarpments.

Vegetation varies according to the altitude as in the lower areas you can find gall oaks and holm oaks as well as a scrub forest made up mainly of boxwood, gorse and hedgehog broom. Higher up we find pines, beech, fir, yew and maple.

The two formations constitute a mid-mountain ecosystem. The forests are dense and there are conglomerate escarpments that serve as an excellent refuge for colonies of raptors. keep an eye out for the bearded vulture, egyptian vulture, golden eagle, griffon vulture and peregrine falcon.

The Royal Monastery of San Juan de la Peña located in Botaya, southwest of Jaca was the most important monastery in Aragón in the high Middle Ages. In its Royal Pantheon a good number of kings of Aragón are buried. It is also an important part of the Aragonese way of the Camino de Santiago.

Built on the ruins of the “New Monastery” this center details the different aspects of San Juan de la Peña from its origins until the monks had to abandon the monastery in the 19th century.

Directions: Take the N-240 road Jaca to Pamplona and pass through the beautiful village of Santa Cruz de la Serós. A mountain road that starts from this village leads to the Old Monastery, and from there it is a further 1, 5 km more until the New Monastery and the Interpretation Centre.