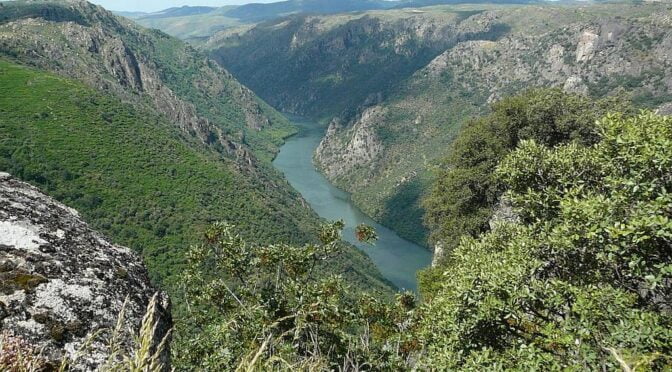 The steep gorges of the Arribes del Duero Natural Park are formed by the river Duero which is also the national boundary between Spain and Portugal. The protected area continues into the Portuguese side where it is called the International Douro Natural Park. In 2015, the two parks were declared a transboundary biosphere reserve by Unesco under the name of the Meseta Ibérica and combined, this enormous protected biosphere reserve covers over 1 million hectares in both countries.

The biosphere reserve of the Mesta Ibéricas altitudes range between 100 and 2000 meters above sea level and includes several protected areas including the natural parks of Arribes del Duero and Lago de Sanabria in Spanish territory and that of the International Duero in the Portuguese part. There are also various areas of the Natura 2000 Network such as the Duero Canyons, the Villafáfila Lagoons, the Sierra de la Culebra and the Albufera del Azibo/Romeo.

There is a very rich plant community present which is characterized by the great abundance of typically Mediterranean species mixed in with cultivated olive, grape vine, almond and other fruit trees. In many areas the farmland has been abandoned and is now covered with naturaly regenerated thickets of junipers, holm oak, gall oak, cork oak interspersed with beautiful meadows of grasses and wild flowers.

Over 300 species of bird have been recorded here but the black stork is one of the most emblematic in the Arribes del Duero Natural Park and they are accompanied by birds of prey such as griffon vulture, egyptian vulture, eagle owl, golden eagle, bonnellis eagle, kites (both red and black), peregrine falcon and lesser kestrel.

Mammals include both the Iberian wolf and Iberian lynx.

Traditionally, hunting of the Iberian wolf has been allowed north of the Duero river but in 2021 the Spanish goverment announced a total ban much to the dismay of the hunting fraternity and many livestock owners. Time will tell how this works. (Read the comments on the ban at the Iberia Nature Forum https://iberianatureforum.com/forums/topic/iberian-wolf-hunting-ban/ )

Located in the town of Sobradillo east of Salamanca on the border with Portugal, the best way to get there is from Salamanca via the SA-300 heading towards Ledesma or towards Vitigudino via the C-517 and from Zamora via the C-527 towards Fermoselle. From Portugal take the N-620 towards Salamanca and the N-122 towards Zamora.

This information centre has audivisual films about the park and its fauna and flora with exhibitions and models showing the geology and history of the area.

Staffed by knowledgable local people this centre will help you get the best out of a visit to the area and has a lot of information on local events and activities as well as exhibitions about the Arribes del Duero Natural Park, its fauna, flora and human history.