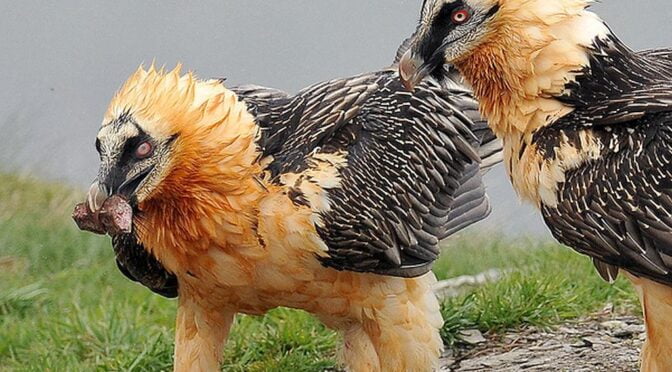 The Bearded Vulture – Gypaetus barbatus – Quebrantahuesos is one of the largest raptors in Spain and also the rarest. It has a wingspan of 2.8 m and length of around 1.10 m. The dark, narrow wings taper to a point while the tail is long and wedge shaped. The body, legs and head are a dirty white although they deliberately stain this to a dark orange colour using iron oxides contained in calcareous rock where available. They have dark feathers around the eyes and it is the long bristles draped beside the bill which leads to the English common name of Bearded Vulture.

They only live in high mountainous areas, usually between 500 to 4000m, preferring ledges on steep cliffs. They can be seen soaring through valleys in search for food. This can be live prey, carrion or the better known habit of breaking bones by dropping them from a great height onto rocks. This exposes the nutrient rich marrow and splinters the bone into smaller pieces which are also eaten.

These birds are very territorial, defending from 200 to 400 km2 against the presence of other adults. Sexual maturity is reached at 5 to 6 years old for females and 8 to 9 years for males. Nesting begins from mid December to January. Normally there are 2 eggs laid but all being well, only one will fledge in the June or July. Disturbances during the initial reproduction period are especially problematic, resulting in failure to raise chicks that year.

Human interference has pushed these birds to near extinction in many areas. Poisoning, power line collision or electrocution, shooting and encroachment have greatly reduced their numbers. There are protection, education, breeding and release programs in place to help support their numbers.

The Bearded Vulture was widespread through the main mountain chains of Spain until the mid 20th century, persecution had almost eradicated this raptor from its western European stronghold.

As recently as 1986 the last specimen disappeared from Andalucia but a reintroduction program has returned this stuning bird to the mountains of eastern Andalusia.

From 2006 to 2019 of the 60 odd individuals released in Andalusia 23 are still alive and being tracked. 19 are dead and the rest have lost or their transmitors are broken . However, 19 of these individuals are confirmed alive and well from recent sightings.

In March 2021 6 pairs of bearded vultures had already nested and were sitting eggs. with 10 chicks already hatched….Great news!

There is an unoficial facebook page that has some English language updated information here. https://www.facebook.com/necrofagasandalucia/

Foundation for the Conservation of the Bearded Vulture

This program has supplied food, mainly sheep limbs, during the winter months when chick survival is at a critical balance. In turn it has enabled the population to grow within the central Pyrenees and expand east and west into the provinces of Catalonia and Navarre. It is from these western populations that sub adults are once again expanding in search of new territories. They are reaching the Cantabrian mountains, especially the Picos de Europa, where projects are underway to prevent a repeat of the hunting / poisoning which eradicated them from here previously.

The “Fundación para la Conservación del Quebrantahuesos” which translates to the Foundation for the Conservation of the Bearded Vulture are continuing with their protection and education schemes to ensure the expansion of this species.

There is an interesting Eco-museum / visitors centre at the Castle of Ainsa in the Aragon Pyrenees with information dedicated to these birds.

If you see a bearded vulture and are lucky enough to also note the colors and position of any rings or wing tags then you can identify the bird on the website of Quebrantehuesos.org.

According to their website there are 135 tagged released birds. Some have radio tracking systems whilst others are ringed and/or wing tagged. Not all the birds are accounted for so your observation is important for the continuing success of the re-introduction system