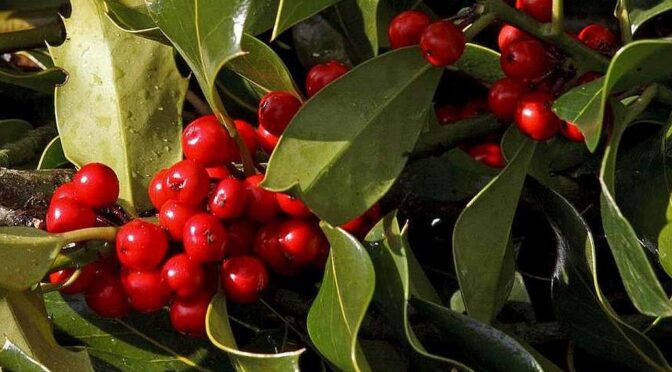 The Garagüeta reserve is located in the Sierra de Montes Claros close to the village of Arévalo de la Sierra in the province of Soria (Castilla y Leon.) It is the most extensive holly wood in Europe and covers around 500 hectares.

This evergreen tree grows as a shrub or tree between 2 – 10 meters high, but has been known to reach up to 16 meters high. With its bright red berries (found only on the female plants), and shiny evergreen leaves, the holly tree has been a symbol of midwinter festivals since pre-Christian times. It has a narrow, conical crown and smooth silver-greyish bark.

From May to august the fragrant male and female flowers are found on separate trees; they occur in clusters, and are white in colour.

The dark green leaves at the bottom of the tree are prickly for protection against animals that may find it a tempting snack but as the tree grows taller the leaves are less prickly because it no longer needs to defend itself. During the winter months, when most other trees have shed their leaves, the Holly is very much alive and bushy which is handy for birds and other animals that use it for protection and feed off the berries.

The slow-growing, wood is very white except in the centre and has been used for turning and inlaying. It can be stained and has been used in place of ebony for the black handles of tea-pots. It is also excellent for engraving. Naturally strict measures are now in place to prevent anyone from cutting the trees down for any of the above uses.

Holly has been used in the Soria area for centuries, mainly for the feeding of livestock, medicine and rituals. It has survived so well because of the continual importance the locals have for it.

The leaves have been used medicinally in cases of fever, colds and rheumatism.

The yerba or mate tea of South America is made from the leaves of a similar species Ilex paraguayensis.

On the other hand though, the berries are toxic and would give any human a pretty bad stomach ache.

Unsurprisingly, there is a rich wealth of folklore and custom surrounding the holly tree. The Celt Iberians in this region called the holly ‘Tinne’ but also referred to it as ‘the sacred tree’ and considered it as their protector.

If you put it in your house it is said to protect you against bad luck and has been used in winter solstice ceremonies for centuries. The amount of berries produced is used as a means of divining whether there will be a harsh winter.

A widespread and firmly held belief around Europe is that it is extremely bad luck to cut down a whole holly tree.

Holly wood was used to make horsewhips for many years, as it was thought to have ‘power over horses’. It was also believed to provide protection against fire.

The most well-known holly-custom, however, is bringing boughs into the house in winter. Originally, holly was a fertility symbol because of the retention of the berries and shiny foliage throughout winter. It was also thought to protect a house from witchcraft and goblins. The pagan tradition of bringing holly indoors was accepted by Christianity; the spines of the leaves symbolizing the crown of thorns, and the red berries representing the blood of Christ.