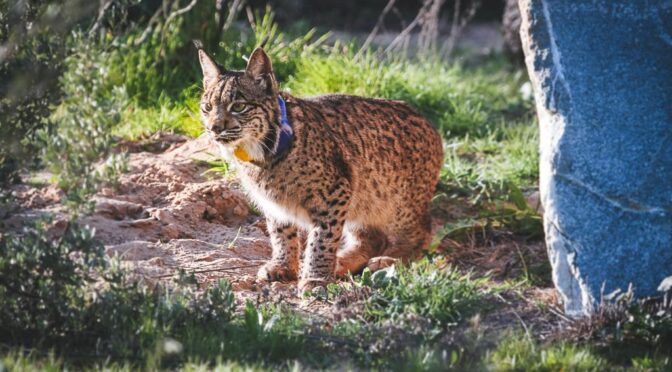 The Nature Protection Service (Seprona) are investigating the disappearance of Iberian lynx in the province of Córdoba after the discovery of several geolocation transmitter collars that appear to have been forcibly removed from the individuals.

In two examples the collar of “Pajaron” who was reintroduced some time ago was found in mid January in the mountainous area of Adamuz. The second transmitter is from a seven-year-old male (“Kot“) released last December between the Guadalmellato and the Cardeña-Montoro Natural Park after a two-month stay at the Life Lince breeding enter in la Olivilla in Santa Elena (Jaén). Suspiciously the second transmitter was found in February by the Special Group of Underwater Activities (GEAS) of the Civil Guard in the Guadalquivir river close to the village of Montoro.

Searching has begun to find out if the two individuals are still alive and its important to note that it is it is practically impossible for them to lose the collars by accident or even in a territorial fight with other lynx.

As the Lynx population grows it is fairly obvious that territories will be expanded and some lynx will move into more human populated areas. This creates a conflict with livestock owners (Especially chicken) as the natural prey of the lynx still in decline (rabbit.) In fact the chicken farmers in the area of Adamuz have been complaining for a long time about this issue stating that over 800 chickens were killed or taken in a short space of time with frequent sightings of “up to 8” lynx around the village. There have even been lynx trapped and unable to escape from a coop after gaining access in order to steal a chicken.

The solutions? Well I suppose the farmers could make the chicken pens more secure. But, the habitat for the lynx is obviously not adequate as there is eveidently not enough food supply for the expanding population. Untill the issue of the rabbit population devastated by myxamotosis in the last decades is solved and the main food supply for the lynx returns to stable levels this issue between a protected species and local human inhabitants will continue.

I have always said that in any reintroduction programme for any species, the habitat (including food supply) must be created first. Whats the point in breeding and releasing animals into an area where they will almost certainly starve to death or be killed by the competition. In the case of the Iberian Lynx, whilst population numbers are still relatively low its not such an issue, but as the reintroduction programme becomes a success we will see more conflict like this.

As for the missing “Pajaron” and “Kot“? One can only assume that they were killed and the transmitters removed and thrown in the river in the hope that it would not be found.

Read more about the Iberian Lynx

One thought on “Missing Iberian Lynx in Cordoba”