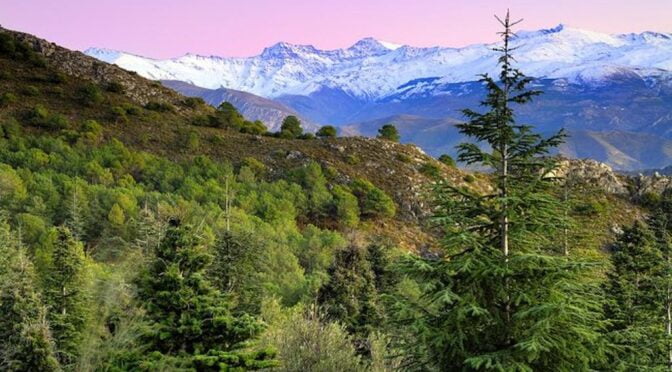 Situated just north east of Granada on a main arterial route the natural park area of Huetor is limestone mountain terrain with typical features such as steep sided ravines, mixed woodland and Mediterranean scrub. Altitude in the park is between 1,000 and 1,600meters above sea level so this area offers fantastic views across to Sierra Nevada from the viewpoint Mirador Buena Vista.

There are several caves and fresh water springs in the area. Usage of this water source can still be seen today in the form of the Aynadamar canal built by the Moors to take spring water from the Fuente Grande in Alfácar into Granada city itself. This water is still channelled to the gardens and fountains of the Alhambra.

Find a hotel in the Huetor natural Park area

The plant life here has an interesting mix of influences, from central Europe, North Africa and the normal types for southern Spain with some endemics from the area of Granada.

The forested area has a wide variety of trees many of which have been introduced through planting schemes. Aleppo pine, Austrian pine, Maritime pine, Cedars and Abies pinsapo or Spanish fir. Holm oaks and some Gall oaks of the original forest also exist, along with smaller Acers.

Of the 800 plus plant species noted in the park the endemics can be divided as follows; 75 endemic to Iberia, 54 from the southern Iberian peninsular and 42 to Iberia and North Africa.

Several different small lizards, ladder and grass snake plus Lataste’s viper are some of the reptiles.

There is a recovery centre for endangered animals at Las Mimbres. (Ask about it in the visitor centre – See below)

Villages and Towns in the area

Near the recreational area of the same name and to several signposted walking routes of interest, you’ll find the Puerto Lobo Visitor Centre which lies within the Sierra de Huétor Nature Reserve.

The exhibition inside provides visitors with information on the natural heritage of this mountain range, composed of limestone and where the water has gradually moulded a karst system with caves, galleries and stalactites. That same water which enters the rock subsequently emerges as crystalline springs which since the Muslim period have been channelled through dykes like that of Aynadamar, which supplied the city of Granada with drinking water.

However, this park has many other attractions apart from its valuable natural resources since it is a place with a rich historic and cultural past, particularly interesting is its Moorish legacy and that it was a key witness to what was to become the Spanish Civil War.

In the reception area the centre also has a comprehensive shop selling attractive products, both local and those of the Andalusian Network of Natural Areas (RENPA). Finally, at the entrance to the building there is a beautiful botanic garden where you can discover some of the species endemic to the park.