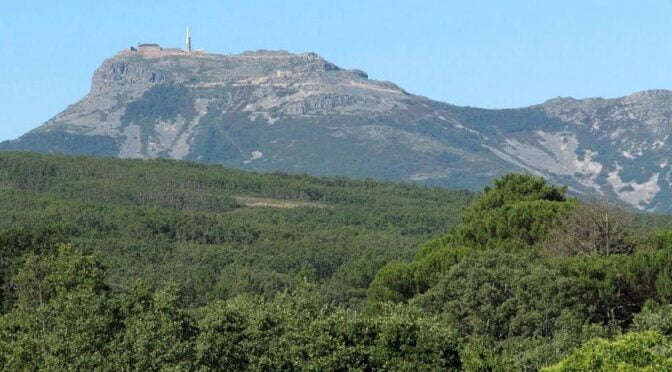 Las Batuecas-Sierra de Francia Natural Park is part of the western foothills of the Cordillera Central. An isolated area, it is located to the south of the province of Salamanca. The highest peaks are the Hastiala at 1,735 meters and the Peña de Francia at 1,723 meters.

The whole area has a great scenic and ecological value with abundant fauna and flora along with a great cultural wealth and an important historical-artistic heritage. There are five municipalities in the area declared “Historic-Artistic Complex” due to the wealth of cave paintings, remains of Roman mines, hermitages and monasteries that are scattered throughout area.

The great biodiversity of this area has led to it also being designated a biosphere reserve by UNESCO as well as SCI and ZEPA within the Red Natura 2000 project.

At higher levels the vegetation has had to adapt to the windswept harsher climate and is dominated by broom and the “hedgehog zone” (low growing prickly shrubs). As you descend, species such as holly and chestnut, oak and birch forests appear. In the lands facing south there are holm oaks, cork oaks, strawberry trees and rockrose whilst in sheltered and sunny areas there are orchards of chestnut, almonds, vineyards and olive groves.

Fauna of the park is well represented with 213 cataloged species of vertebrates, of which 9 correspond to the fish group, 13 to amphibians, 19 to reptiles, 126 to birds and 46 to mammals.

As for birds, it is common to see vultures, both griffon and black, golden eagle, peregrine falcon, Egyptian vulture and eagle owl. The black stork, listed as endangered, is also present

The Peña de Francia lizard (Lagartija batueca – Iberolacerta martinezricai) is exclusive to these mountains as the name sugggests.

The information centre is located in the village of La Alberca. From Salamanca, take the CL-512 road towards Necinos. After about 30 km arrive at Tamames and from there on the SA-215, follow the signs to La Peña de Francia. It can also be reached by the A62 motorway; Salamanca – Portugal. Take the Fuentes de San Esteban exit towards Cabrillas-Tamames-La Alberca.

There are excellent audio visual displays, exhibitions covering fauna, flora and the area in general plus the friendly helpful staff will help you to find the best routes and places to see in the area.