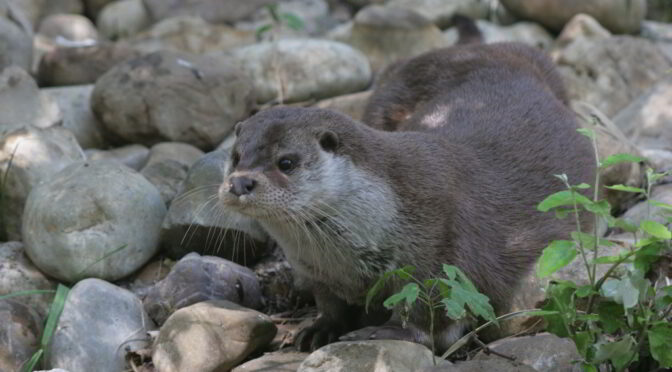 The Otter – Lutra lutra – Nutria Europea. A carnivorous mammal in the subfamily Lutrinae. They are semiaquatic in Spain with diets based mostly on fish and invertebrates.

Although most European otters tend to prey primarily on fish, some have developed a taste for frogs and toads—a food choice that requires some deft preparation. Because common toads (Bufo bufo) have toxins in both their skin and the glands on either side near the front of their bodies, these resourceful otters use their sharp teeth to remove the skin from the back half of the toads and then eat just the hind legs. While common frogs (Rana rana) don’t have toxic skin or glands, most otters appear to not know the difference, and generally play it safe by following the same food-prep routine they use on toads.

There is a brilliant photo of an otter with a frog on the website link below. https://www.biographic.com/frog-leg-feast/

With the creation of many natural and national parks in Spain, and other environmental awareness campaigns, the otter population seems to have increased, certainly in Andalusia, over the past 20 years. However, this recovery has been relatively slow, and in some areas the impact of human activities still prevents the species, from expanding into new territory.

There is also a concern that river water quality is still declining in many areas due to overuse of agricultural and home use chemicals. Such as household cleaning products pesticides and herbicides. The otter relies on a clean and healthy river environment for its food supply, so the consequences of pollution are devastating for this mammal.

Recent studies published in 2022 have shown that otters are feeding on the introduced and invasive American crayfish so the bigger the otter population the better! See the conversation over at the Iberia nature forum: https://iberianatureforum.com/forums/topic/good-news-for-spanish-otters/

You are most likely to smell an otter living in an area well before you see one. The feces (spraints) are typically identified by their distinctive aroma, the smell of which has been described as ranging from freshly cut grass to putrefied stinking fish. The holt is built under a fallen tree, root or rocky outcrop and lined with grasses, moss and leaves.

Sexual maturity of the European otter is reached at around two years of age and males at approximately three years. The gestation period in otters is about 60 to 86 days. The newborn pup is cared for by both parents. After one month the pup starts exploring outside of the holt, and after about two months is able to swim without the aid of its parents. The pup lives with its family for approximately one year and they can have a lifespan of around 16.

Otters are mischievous by nature and can often be seen enjoying the company of other family members, playing and chasing each other in the water.

Are you struggling with identifying those bugs and beasties? Why not check out the Iberia nature Forum!