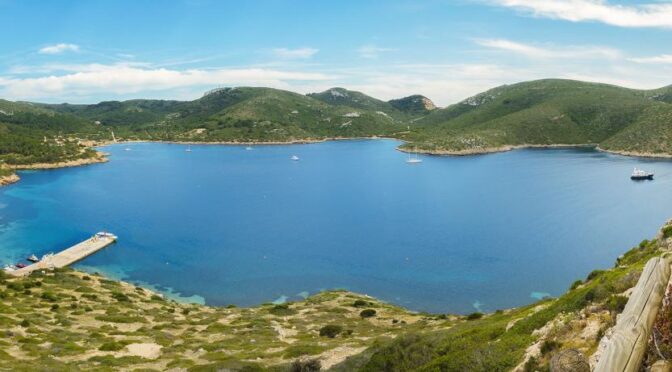 The Cabrera Archipelago Maritime Terrestrial National Park includes over 90,000 hectares containing the whole of the Cabrera Archipelago and open water habitats, mainly over the Emile Baudot Escarpment which is prime habitat for many creatures, including whales, dolphins and turtles. It is located to the south of Mallorca, ten nautical miles from the port of Colonia de Sant Jordi (ses Salines).

The park is one of the largest in Spain but due to its remoteness it attracts relatively few visitors. Endangered animals such as turtles and whales come under the parks protection and rare species of fish and corals can be found in the underwater caves.

For a more immersive and hands-on experience, our friends Alnitak
invite volunteers on board their 9-day open water expeditions on
board the 110-year old ship Toftevaag. On these voyages, they
regularly drop anchor in Cabrera, and spend many hours on the
water monitoring top pelagics such as turtles, cetaceans and tunas,
offering members of the public a unique experience showing how
marine conservation is conducted.

The islands are unpopulated but there are always park staff, biologists and other scientists on site. The archipelago has great natural value and the coastal landscape of Cabrera is considered to be one of the best preserved on the Spanish coast. The islands are inhabited by important colonies of seabirds and other endemic species and due to the abundance and variety of birds, the park has also been declared a Special Protection Area (SPA) for birds.

The steep escarpment and deep sea corals are key habitats for
many species, and creatures such as sperm whales are regularly
sighted feeding in these waters.

Within the limits of the National Park, sport fishing is prohibited including underwater fishing. It is also forbidden to disembark, except at the main dock in the port of Cabrera.

A full botanical list of flora present can be found here. (In Spanish)
https://www.miteco.gob.es/es/red-parques-nacionales/nuestros-parques/cabrera/visita-virtual/flora/default.aspx

This is an important stopover point on the migratory route of more than 150 species of birds both in the spring and in the autumn. Audouin’s gull (Larus audouini) and Eleonora’s falcon (Falco eleonorae) are also present.

The deeper waters off the Emile Baudot escarpment, included in the
extended park, are key habitat for tunas, sharks, cetaceans and sea
turtles. Frequently sighted species are Risso’s dolphins and sperm
whales, marine mammals that dive to feed on deep sea squid.

Thisopen water ecosystem is an ideal “natural laboratory” to study these
top pelagic predators, and our friends at Alnitak have
been doing so for a few decades. (Their data was crucial in the
extension of the National Park).

A full list of species can be found here. (In Spanish)
https://www.miteco.gob.es/es/red-parques-nacionales/nuestros-parques/cabrera/visita-virtual/fauna/default.aspx

The seabed also represents a very important part of the Park, with more than 200 species of fish and numerous endemic invertebrates.

What to visit on the islands?

The following self-guided itineraries are possible:

You can also take a series of guided tours. For these itineraries you should request information at the information office on the island of Cabrera. (The lighthouse of l’Enciola, Na Picamosques and the Serra des Canal de ses Figueres).

The Cabrera National Park interpretation center is located in Colònia de Sant Jordi. here you can get the necessary documentation for your visit to the national park and learn about the history of Cabrera.

Colònia de Sant Jordi has a marina from where daily excursions are organized to visit the Maritime-Terrestrial National Park of the Cabrera Archipelago.

Remember! If you are travelling here in your own boat you will need to get the relevent permits beforehand. Find out what you need with the port authorities. and the administration office for reservations.

In terms of wildlife, there are strict rules and navigators aren’t allowed to approach protected species such as whales, dolphins and turtles. Please do not actively seek to interact with these as this can inadvertently alter the pristine natural behaviour that is key to preserving this special ecosystem.

One thought on “The Cabrera Archipelago Maritime Terrestrial National Park”