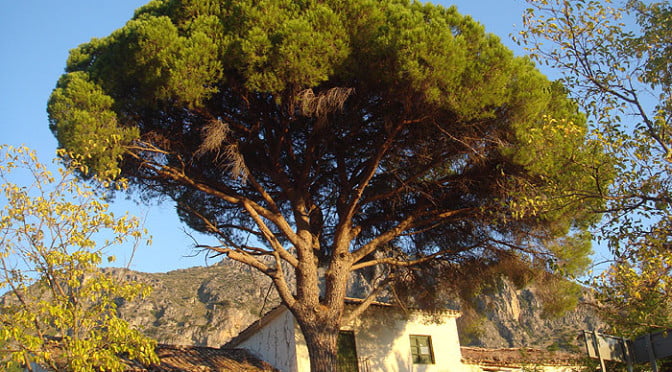 The Stone Pine is an evergreen tree easily recognized by its outline, the dense crown is almost a round globe in young specimens whereas in older trees it is shaped like a wide spread parasol, supported on large, elegant radial branches. It originates from the Mediterranean area and is popular there and elsewhere in the world as a cultivated tree. It is favoured both for its attractive form and edible pine kernels. For around 6000 years pine nuts have been collected as nutritional snacks!

These trees can reach a height of 25m, with a trunk diameter of around 1m. In woodlands and forests they form an undulating rich green canopy as opposed to the conical shapes of other pines. The bark flakes in thin layers, greyish on the exposed surfaces and a reddish brown underneath, it is notably segmented by deep fissures. Dark green, semi rigid needles are arranged in pairs and measure from 10 to 18 cm long. Pine needles are highly suited to periods of drought as experienced in much of the Mediterranean area, with little surface area and a waxy layer, their rate of transpiration is greatly reduced.

The pine cones are a helpful way to recognise this tree as they are solid and ovoid (about 10 to 15 cm long). They begin to develop from flowers which are borne in the spring, initially forming small cones. These don’t actually mature until their third year, which is quite unusual in pines. Tucked inside the scales of the rather woody mature cones are hard shells which look like smooth nuts. These are covered in a dusting of black powder and look totally different to the small, winged seeds of other pine trees. Inside this nut-like shell is a 1 cm long fleshy white kernel with a brown papery cover; this is the part that would grow into a new tree if germinated. These kernels are rich in oil and protein, with a soft texture and a delicate hint of resin to their flavour. They are eaten raw or used in cooking, for both savoury and sweet recipes.

In Spanish the tree is commonly called Pino Piñonero. The cones are harvested during the winter or early spring when they are still green and tightly closed. They are plucked from the tree using a hook on a long pole. They are then gathered and stored until the summer when they will open naturally in the heat, or they can be heated artificially, so releasing the seeds.

Their viability for the seed crop is under threat. The accidental introduction of a beetle into Europe from its native North America is jeopardising future harvests. The Western Conifer Seed Bug (Leptoglossus occidentalis) feeds on the sap of the cone in its first stages, thus preventing their development. The would-be cones simply wither and fall from the tree. In its native country they breed only once a year, but here in Spain they breed twice a year and as a winged beetle they are able to disperse easily to other trees. Another pest eats the leaves, in small numbers this in not a major problem, but the Pine Processionary Caterpillar (Thaumetopoea pityocampa) can decimate a younger tree if there are numerous nests.

Stone pines, or Pinus pinea as they are known botanically, can be found growing alongside other pine species and mixed oak trees – although they are certainly more impressive when they form extensive woodland on their own. These are long-lived trees, to around 300 years, and usually bear fruit in abundance at 20 + years of age. With this in mind, the 3 year development of the seeds and knowing that their collection is labour intensive, it is easy to see why the prepared kernels are expensive to buy in the shops. This is not the only part collected, as the timber which is hard, lightweight and durable, is used for carpentry, construction, fencing and firewood.

Spinach with Cream and Pine Kernels.

A variation would be to add raisins to the mixture before turning into the oven dish.