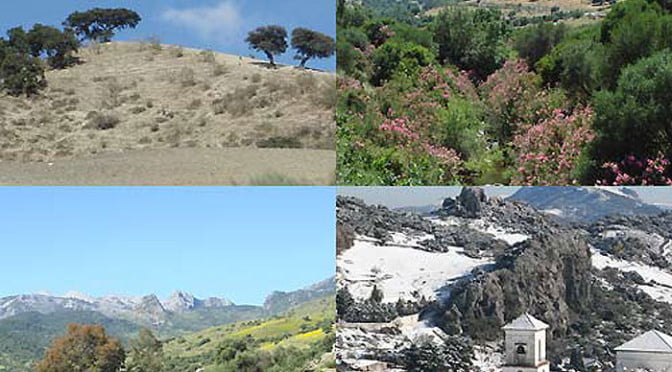 ‘Grazalema has the highest rainfall records in Spain’. This is a phrase that is commonly found on the internet, but without further explanation could be very off putting to the holiday maker! Mountains will always alter their local climate where-ever they are in the world, and this is no exception. Note that only a few hours drive away at the eastern end of Andalucia is Europe’s only desert!

The most green and humid areas of the Spanish Peninsular are the northern coastal zones which face the Atlantic ocean and from the Pyrenees mountain chain to the Catalan coast of the Mediterranean. These areas have rainy weather with a precipitation average of over 800 mm per annum and yet statistically the village of Grazalema in Andalusia is famous because of the fact that it receives the most rainfall in the  iberian Peninsular. Some years recording more than 2000mm.

In winter is it often grey and drizzling for weeks on end?
No, there may be grey and drizzle for a few days but even then the light levels are usually good and there are often breaks where it is pleasant to go out.

So does it rain a little every day to achieve this title?
The rain in the Sierra of Grazalema falls in the autumn, winter and spring and even then only sporadically, this is followed by a long hot / dry summer and, ironically, often suffers from drought! Statistically Grazalema has on average 300 days of bright blue skies and sunshine every year.

What makes Grazalema the wettest place in Spain?
The Sierra de Grazalema has a special microclimate. We are in a place whose topography dictates it to be the rainiest site in Spain because it is the first high area which the humid sea winds hit after coming off the Atlantic. Winds driven across these lowlands warm up and then rise abruptly on meeting the mountain range, causing a cooling effect and cloud formation with precipitation. The natural inclines then guide water to flow rapidly into streams, rivers and arroyos (seasonally flowing streams that are dry during summer). Lower down this water is being reserved in man-made reservoirs to prevent its instant loss from the area.

How can the wettest place in the whole of Spain suffer a drought!
The bulk of the mountain zone is calcareous and with limestone being porous the rainfall percolates through it – quickly draining surface water away into underground channels, caves, rivers and caverns.

The weather pattern commonly goes from clear skies or partly cloudy to a shower/deluge followed by clear skies again within a day or so, then the sun shines warmly and quickly dries out the ground.

This area of south west Spain holds an incredible collection of plants and animals due to its microclimat and also its proximity (and prehistoric land connection) with North Africa plus its escape from the ice age which covered most of Europe. A great diversity of flora has continued to flourish in this specialist Mediterranean microclimate.

3 thoughts on “The Weather In Grazalema”