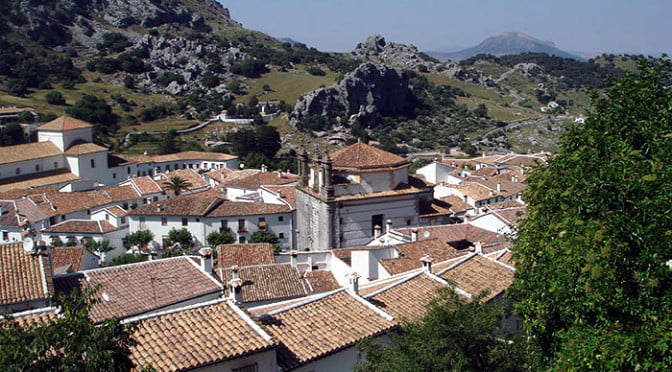 Grazalema is a traditional white village (pueblo blanco) located in the north-eastern area of Cadiz province. It nestles amongst the beautiful mountains of the Sierra de Grazalema and has a local population of around 2000 people inhabiting the village and surrounding countryside. Set in a protected area popular for nature and outdoor enthusiasts the village itself is on the list of obligatory visits on the route of the white villages of Andalucia.

The true origins of Grazalema are still largely unknown and, like much of our past history, are shrouded in the mists of time. But, the Roman Villa of Lacidulia, situated in an estate near to the present village has been traditionally considered the ancestor of the village.

Certainly, during the eighth century the area was populated by the Berber people from North Africa who gave the name “Raisa lami suli” to the urban area. Afterwards it was called Bensalama or “son of Zulema”. Later this was altered to “Gran Zulema” and by the time of the Christian conquest in 1485 it was known as “Zagrazalema

As early as the 17th century the Grazalema that we know, became famous for its textiles, making blankets and  articles of clothing from wool. The valley below the village known as “La Ribera” was an important area with many water powered mills processing wool for the textile industry. Other mills in the same valley were busy pressing olives for oil and grinding wheat for flour. Sadly many (though not all) of these mills are now abandoned and in ruins or have been converted to weekend houses, and the machinery lost. The 19th century industrial revolution and mass production of textiles in the north of Spain caused a serious economic problem to the cottage industry villages such as Grazalema – that alone employed the labour of over 4000 workers for the various areas of the textile industry. You can imagine the scene as production pretty much stopped causing mass unemployment. That said, you can still buy high quality woollen products made in traditional ways and even visit the small working museum in the village to watch items being made. See more at the website of artesania textil de Grazalema here

Along with the textile industry the traditional work of local people is centred on small scale agriculture, sheep and goat farming, the harvesting of cork and also furniture making. Some of the old water powered mills were used as carpenter’s workshops where the water powered a central shaft for belt driven machinery. Now carpenters are turning out high quality workmanship from modern workshops.

Tourism now plays a major role in sustaining the village and its people. The numerous bars, restaurants and hotels depend on visitors coming to see the white villages of Western Andalusia and the beautiful scenery whilst other companies provide tours for hiking, canoeing, climbing and other outdoor activities. The fact that the mountains are protected by law means that the sierra de Grazalema natural park also provides direct employment to the local work force.

The first celebration of the summer is the Romeria de San Isidro which is held on the last Sunday of May. It celebrates the arrival of summer and involves a lively procession of virtually the entire village down to a pasture in the ribera valley. In the usual way of Spanish festivities there are copious amounts of food and drink and lots of loud music. The party goes on all day and for as long as anyone has the energy to keep going.

During the third week of July, the Fiestas of Carmen are held. Music and dancing goes on virtually 24 hours a day and the climax of the festivities end with the “Lunes de toro de cuerdo” This event is not for the feint hearted as it involves a fighting bull with a long length or rope tied to its horns and the villagers pulling it around in a tug of war whilst at the same time trying not to get gored. It does involve what many people consider to be animal cruelty and so a decision needs to be made whether you want to witness this or not. As the name suggests it is always held on a Monday.

Around the third week of August are the “Fiestas Mayores” the big week of celebrations including live bands, fun fairs, dancing, late nights and lots of food. The music is deafening and the partying frenzied for the youngsters of the village but there is always something for everybody at the August feria.

The eighth of September is a celebration of the patron saint of Grazalema “Nuestra señora de los angeles” (our lady of the angels).

There are various bars and restaurants around the village, the majority being centred around the plaza de España and the plaza de Andalucia. Food is generally simple but of a very high quality based on meat dishes and a good amount of vegetables. Vegetarians can visit Grazalema without a problem!