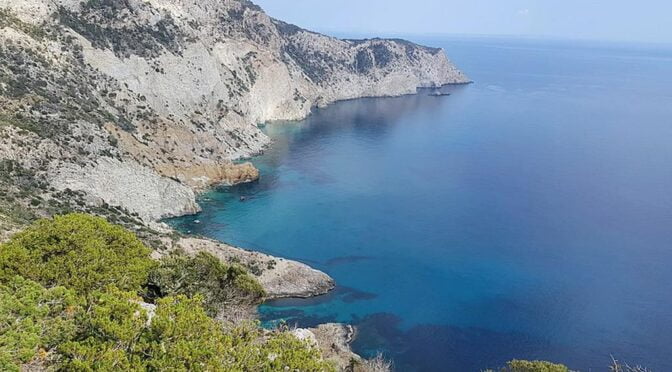 Cala d’Hort, Cap Llentrisca and Sa Talaia Natural Park was a protected natural area located in the municipality of Sant Josep on the island of Ibiza. It remains a coastal area with a wide variety of landscapes covering 2773.31 hectares (2208.81 land and 564.50 marine hectares). The closed bay of Cala d’Hort, the Cap Llentrisca cape and the Sa Talaia de Sant Josep peak constitute the highest area of ​​the island.

Among the main values ​​of the park are a large number of plant endemisms such as ginesta as well as important plantations of pines, garrigues, blackberries and oleanders. In the area there are also numerous colonies of nesting birds, among which the Eleonor’s falcon stands out. there are also endemic subspecies of lizards present on the islets.

Since its declaration as a protected natural area in February 2002 , the park has undergone several modifications in terms of its extension and protection. Both the Sa Talaia area, in 2003 , and the public estate of Ses Païses de Cala d’Hort, in 2005 have been removed and the park is currently reduced to just the islets and the marine environment. As a result of these changes the area is now called Es Vedrá, Es Vedranell and Islotes de Poniente Nature Reserve.

The islets are clustered into two groups. The first is the group consisting of Es Vedrà and Es Vedranell, and the other takes in the Illots de Ponent, which include Sa Conillera, l’Illa des Bosc, S’Espartar and Ses Bledes: Na Gorra, Es Vaixell, Na Bosc, Na Plana and S’Escull d’en Ramon (reef).

Find a hotel on the island of Ibiza

The islets are one of the main breeding grounds for aquatic birds and birds of prey including the Audouin’s gull (Larus audouinii), the Cory’s shearwater (Calonectris diomedea), the Balearic shearwater (Puffinus mauretanicus), the Eleonora’s falcon (Falco eleonorae), the peregrine falcon (Falco peregrinus) and the European storm petrel (Hydrobates pelagicus). As regards this last species, S’Espartar is home to one of the most important colonies in the western Mediterranean.

Invertebrates are also well represented here, and particularly molluscs, such as the snails of the Trochoidea genera, and coleoptera, or beetles.

The Eivissa wall lizard (Podarcis pityusensis), which is protected by different laws, boasts a number of endemic subspecies that vary in size and colour from one islet to the next.

The sea bottoms are well conserved and house a rich and diverse fauna represented by species such as the sea fans (Gorgonia sp.), bottlenose dolphin (Tursiops truncatus) and fish species including the grouper (Epinephelus sp.).

The most common endemic plant species are Silene hifacensis, Diplotaxis ibicensis, Teucrium cossonii subsp. punicum, Asperula paui, Limonium pseudoebusitanum. Other species less common in the Pitiüses Islands can also be seen here, such as the European fan palm (Chamaerops humilis) and the tree spurge (Euphorbia dendroides). The esparto grass communities on S’Espartar are particularly important, as they are the most extensive communities in the Pitiüses Islands.

Also diverse are the underwater plants, which are primarily represented by the marine phanerogam beds, among which the endemic Mediterranean species Posidonia oceanica is particularly worthy of note.

Access is of course by boat and permits are required…. For visiting the area its best to ask at one of tourist information offices on the island of Ibiza

October to March:
Monday to Friday from 10am until 3 pm
Saturday, Sunday and public holidays: 10am until 2 pm

April, May, June and September:
Morning: Every day from 10am until 2 pm
Evening: Monday to Friday from 5 pm until 8 pm

July and August:
Morning: Every day from 10 am until 2 pm
Evening: Monday to Saturday from 6 pm until 9 pm