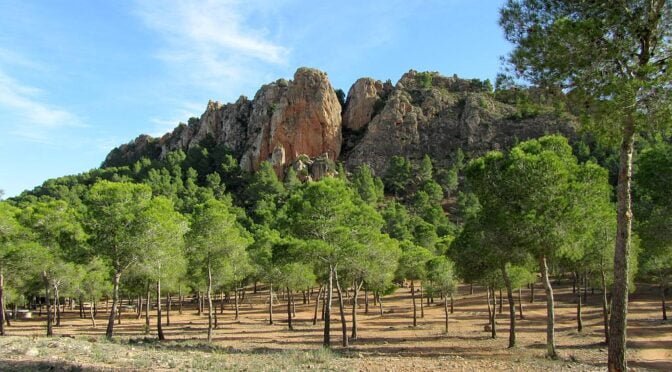 Due to its proximity to Murcia, the Carrascoy y El Valle Regional Park (Parque Regional Carrascoy y El Valle) constitutes the main “green lung” of the capital and its entire metropolitan area and It is made up of the extensive chain of mountains that close the valley of the Segura river and a part of the Guadalentín valley to the south.

A varied landscape with plantations of Aleppo pines from the 1940’s and some areas of Holm oak contrasting with the more sparse vegetation of heath, scrub, maquis and garrigue covering. There are also lesser areas of dry grassland and steppe that carry plants that are well adapted to coping on poor soils with long spells of drought.

On the El Majal Blanco estate (owned by the Murcia City Council) located in the center of Sierras del Puerto there is a small formation of large cork oaks (Quercus suber) (over 100 years old) preserved among the holm oak forest (Quercus ilex).

Endemic to the south west region of Spain is the yellow flowered Centaurea saxicola and Lafuentea rotundifolia which is an aromatic plant, the only member of the genus Lafuentea (Scrophulariaceae) it grows in calcareous and dolomitic rock crevices and under rock ledges. Sedum sediforme can be found growing in similar areas.

From Murcia take the A-30 towards Cartagena, turn off towards La Alberca, exit 148 and follow the signposts marked “El Valle“

The “El Valle” Visitor and Management Center houses rooms for information, communication and dissemination of the natural and cultural values ​​of the El Valle and Carrascoy Regional Park, as well as technical management offices and offices for the Park’s Forest Agents.

There are exhibitions covering the main values of the park, its flora, fauna and geology. There are also exhibits of marine fossils discovered in the area.

Information regarding the natural, cultural and historical values ​​of the Park, trails, recreational areas and other points of interest. The Center has an interpretation room dedicated exclusively to the values ​​of the Carrascoy y El Valle Regional Park and In addition other exhibitions with different themes are exhibited. There is also a projection room in which an audiovisual divided into 3 parts is reproduced showing examples of the fauna, flora and cultural history of the area.

The CRFS Recovery Area, in operation since 1984, performs various works related to the conservation and recovery of protected species of wild fauna in the region of Murcia. These include the Program for the Recovery of Protected Wild Fauna Species .

Every year more than 2,500 animals are cared for (mainly birds but also reptiles, mammals and amphibians). Of these, around 40% are rehabilitated and returned to their natural environment, while some of those who do not manage to fully recover are relocated to the environmental education area.

There is also a Botanical Garden “Arboretum” showcasing local and worldwide plantlife. 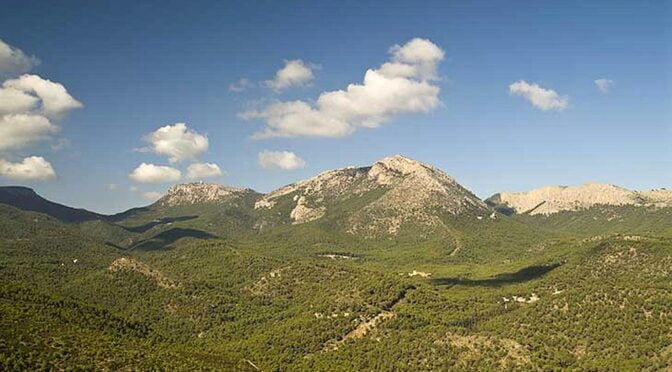 The Sierra Espuña Regional Park is located at the eastern point of the Cordillera Betica and situated in the heart of Murcia, one of Spain’s smallest provinces. It is a heavily wooded area in a generally arid zone.

At the end of the 19th century, the entire mountain range was in a lamentable ecological state, with the almost total loss of its tree mass and presenting serious desertification processes. In 1889, the forestry engineer Ricardo Codorníu undertook the enormous task of reforesting the entire mountain range. This reforestation project became a model for its time and was then carried out in many other areas across Spain.

The high peak called Pico Morrón, at 1,579m dominates the landscape which contains a combination of rock forms, each eroding at different rates. The limestone areas give the typical karst formations of deep valleys and caves.

There is a national hunting reserve and through this large mammals have been introduced, the European Mouflon (Ovis musimon) and Barbary sheep (Ammotragus lervia) are both at home in the dry, stony mountain peak areas.

In contrast to the pine clad mountains in the north-eastern area is the protected lunar type landscape made up of the mineral gypsum. The Barrancos de Gebas, known as the “bad lands” (tierras malas) are a succession of arid ravines and gullies.

Find a hotel close to the Sierra Espuña Regional Park

Holm oaks (Quercus ilex) appear in small numbers from around 700m with the pine trees. There are also some oaks on higher, poorer ground, where they are of small dimension, dwarfed by the conditions. The undergrowth is typical for the Mediterranean region, Kermes oak, (Quercus coccifera), Prickly juniper (Juniperus oxycedrus), Lentiscus (Pistacia lentiscus), Buckthorn (Rhamnus lycioides) and Gorse (Genista longipes). In more open areas these are accompanied by Rosemary, Thyme, Rockroses and clump forming Esparto grass (Stipa tenacissima).

The Mouflon (Ovis musimon) was first introduced to the islands of Corsica, Sardinia, Rhodes and Cyprus during the Neolithic period, coming from Southwest Asia. This long separation from original stock has led to the categorizing of the subspecies. Now rare in those island situations, its numbers have grown in mainland Europe from recent introductions. It is red-brown in colour with white belly, muzzle, eye patches and lower legs. The Barbary sheep, from North Africa, is a more uniform brown.

Butterflies within the park that deserve special attention are Spanish argus (Aricia morronensis subsp morronensis), Carswell’s Little Blue (Cupido carswelli) and the moth Chersotis margaritacea subspecies espunensis which can only be found at Morrón.

There are 26 Pozo de Nieves or “Snow wells” in the mountain region. These structures are above 1300m altitude and consist of a large circular hole cut into the hill and lined with stone. There are steps built to the base and a domed roof. Snow was collected by hand during the winter, compacted to form ice and stored until needed in the towns during the summer months. The ice was transported by mule and donkey up to 70km. They were used from the 16th century right up until the 1920s.

This viewpoint offers one of the best panoramic views of the entire Sierra, since it is located at an altitude of 1,201 m, it is a must if you want to climb the Morron de Espuña and see the Pozos de la Nieve. A stop here offers the opportunity to see places as beautiful as the Umbría de Peña Apartada, the Peña Apartada itself, the Cerro de la Garita, and of course, the deep and green valley of the Espuña River. In the distance you can see the Barrancos de Gebas.

Fabulous views of the Pozos de la Nieve on the right and Cartagena on the left, places as beautiful as the Cerro de Pinos Blancos, the ravines of Malvariche and La Hoz, two of the most important streams that flow into the Pliego river. Along the Pedro López trail, there are two restored snow wells.

This is one of the most unknown areas of the Regional Park. The area has a great landscape and ecological interest, in which dry agricultural landscapes and large areas of pine forest intermingle which favor birds of prey. The Barranco de la Hoz is one of the deepest in the park.

The Gebas ravines are one of the most spectacular landscapes of all those that come together in the Sierra Espuña Regional Park . It is a desert-type space, like a lunar landscape or bad-lands, which is formed by gullies, canyons and ravines.. The area covers almost 2000 hectares and is distributed between the municipalities of Alhama de Murcia and Librilla.

Totana is Spain’s second most important area for pottery production.

This information centre has a good selection of guides and maps and knowledgable staff that can help you get the best out of a visit to the area. The center also has an Interpretation room where you can learn about natural and cultural values, especially fauna and flora through panels, models, interactive elements and photographs. There are also temporary exhibitions related to the regional park and other protected areas of Murcia province.

Next to the visitor center is the area known as Huerta Espuña. It is one of the most historic places in the park, since it was the center of operations for the repopulation tasks directed by Ricardo Codorniú, here the first experimental crops were carried out to study the viability of the plants in this environment, which later they would be used for reforestation. Currently you can see the number of orchards that were used, some of them are still in use for projects to recover protected wild flora.