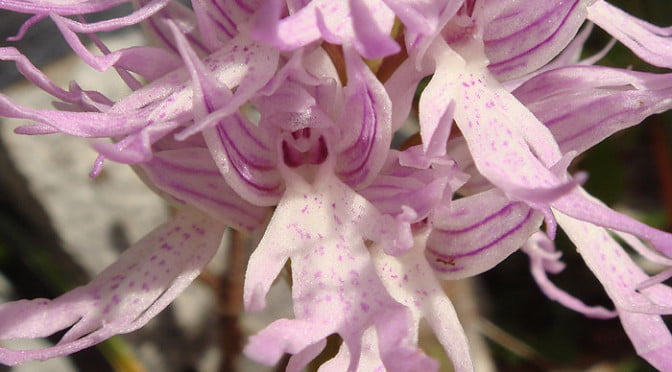 The Mediterranean species of orchids (Orchids in Spain) are all terrestrial (unlike the flamboyant tropical species that grow in tree hollows termed epiphytic.)

They are under constant scrutiny by biologists and it seems are constantly being renamed and re categorized.

Orchids have the smallest seeds of the flowering plant world, like dust and produced in great numbers, they differ from normal seeds in that they contain no food store or endosperm. Therefore the seed is more vulnerable to the conditions into which it falls and can suffer a high mortality rate. This happens because the seed must create a symbiotic relationship with mycorrhizae, soil born fungi, in order to germinate. It is only with the assistance of this fungus that the seed can then build up nutrients to develop a root and create green leaves. It can take over 10 years for this relationship to develop from germination to allow enough strength for the orchid to produce a flower.

This symbiotic relationship could explain why there can be an orchid flowering one year which is not seen again for several more years. During its green leafy phase the orchid may feed itself and supply starches to the fungi. After flowering, when the root is depleted and the leaves shrivelled it is reliant on the fungi to replenish any nutrients needed to produce leaves for another season.

Orchids in Spain are pollinated by insects and many of the Ophrys species flowers have developed to attract a specific insect even replicating the shape and pheromones of a female to lure a male. Meanwhile the Orchis species look invitingly like nectar rich types of flowers but do not offer any food rewards to their pollinators.

Here are some of the more easily identifiable orchid species in Spain. Common English name (scientific name) Spanish common name. (if you spot an error let me know!) 🙂

END_OF_DOCUMENT_TOKEN_TO_BE_REPLACED 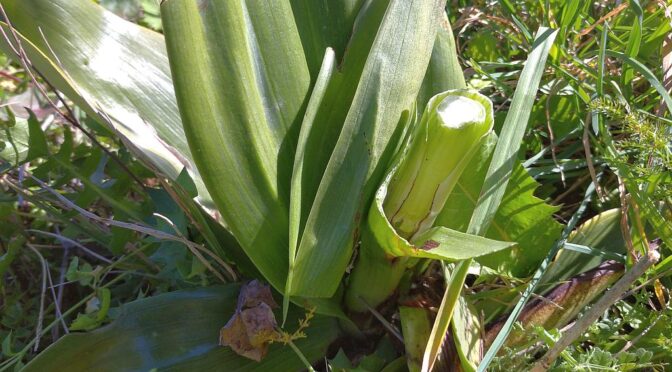 Lets start by saying that Cutting wild flowers in Spain is illegal. Not only illegal, it is selfish and a very stupid thing to do.

Such a shame that a beautiful giant orchid that my children have been watching grow with fascination over the last few weeks has been cut and removed by someone who presumably wanted a “pretty flower” in a vase on their kitchen table. Sigh!

Just don’t do it people!

Read more about the Giant orchid and other orchids in Spain here: https://wildsideholidays.co.uk/orchids-in-spain/

If we could just fix the small ignorant and selfish things like cutting wild flowers in Spain that the human race does then imagine what the bigger picture would look like?