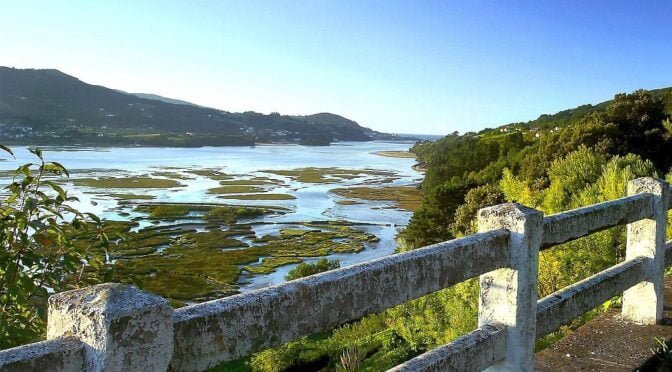 The Urdaibai Biosphere Reserve is located around the estuary of Urdaibai which is a natural area formed at the mouth of the river Oca. It is home to a wide range of different ecosystems and landscapes, the most important being the Cantabrian holm oak woods, the Atlantic countryside, the coastline and the marshes. The marshes are probably the most visited and constitute an important wetland in the Atlantic Basque Country, due to their size and their excellent state of conservation. They provide an essential resting ground for birds during the migratory and wintering periods.

In the summer of 2021 the area became famous internationally via its osprey webcam project run by the Urdaibai Bird Center when it was noted that of the three eggs layed the first chick to hatch was an albino, totally white and with red eyes. (The first ever recorded.) After the other two chicks hatched it was clear that something was wrong and sadly the albino died a few days later. It seemed that the chick was blind or partially blind and could not compete with the two other siblings for food.

Later the two remaining chicks also died after a storm caused hipothermia with the parent not having enough experience to keep them warm enough overnight. (see the topic over at the Iberia Nature Forum – https://iberianatureforum.com/forums/topic/albino-osprey-in-urdaibai-biosphere-reserve/)

This is a popular area for birdwatching (Up to 250 bird species can be seen here throughout the year) as the estuary and surrounding wetlands are a very valuable habitat for birdlife being a resting area for migratory birds, as well as for nesting, sedentary, wintering or accidental birdlife (A visit to the Urdaibai Bird Center is obligatory – See below)

Find a hotel close to the Urdaibai Biosphere Reserve

If you are in the area then the best (obligatory) place to visit is the Urdaibai Bird Center which is a state of the art museum and observation point from which visitors can enjoy the world of birds and their migratory journeys. Once a fish canning factory, the center is located in the heart of the Urdaibai Biosphere Reserve and houses an audio-guided exhibition and an observation platform equipped with telescopes.

Located in the municipality of Gautegiz Arteaga, the Center is about 4.5 km away from Gernika-Lumo, and stands on the right bank of the river Oka, on the edge of the marshes. If you are driving from Gernika, take the road heading towards Lekeitio until you reach the Kortezubi roundabout. After about 700 m, turn left when you see the signpost directing you to the centre car park..

Find out a lot more on the website for the Urdaibai Bird Center here: http://www.birdcenter.org

The official website for the Urdaibai Biosphere Reserve is here: https://turismo.euskadi.eus/es/top10/espacios-naturales/reserva-de-la-biosfera-de-urdaibai/aa30-12376/es/