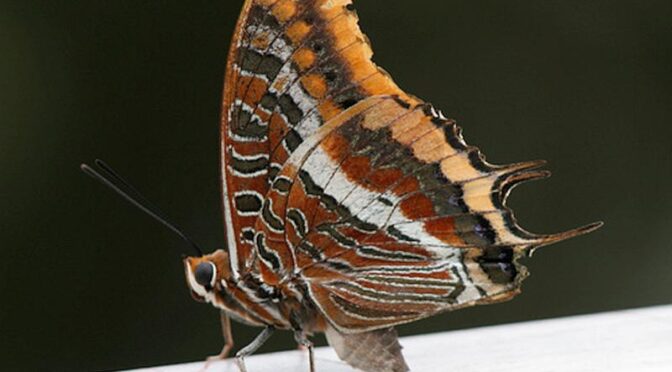 In flight, the Two-tailed Pasha – Charaxes jasius – Bajá de dos colas is a fast moving, large, darkly coloured butterfly. At rest the intricate under-wing patterns and 4 tails can be observed.

It is generally localised to hilly areas where the caterpillar food plant of Strawberry tree (Arbutus unedo) is situated.

The butterflies can be seen feeding on ripe fruit such as figs as well as faeces.

The caterpillar can be up to 6cm in length. It is green with 4 very distinctive backward facing spikes on its head. They create a silk pad on a leaf and return to this after feeding.

These fantastic images of theTwo-tailed Pasha – Charaxes jasius – Bajá de dos colas were taken in Grazalema by Sue Eatock and show the life cycle from egg to butterfly.