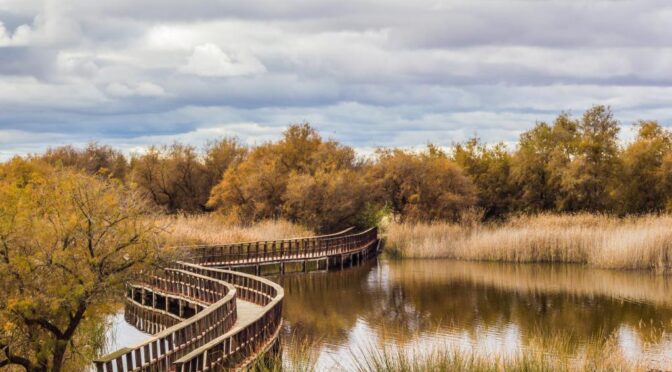 The Tablas de Daimiel National Park is one of the most visited in Spain with an average of almost 200,000 people registered each year. The wetland represents one of the last ecosystems of fluvial tables that are formed when rivers overflow onto areas of flat landscape.

Formed at the confluence of the Guadiana River and its tributary the Cigüela this is one of the most important aquatic ecosystems in the Iberian Peninsula and is home to a great variety of fauna and flora especially aquatic birds both resident and migratory.

Threats to the future of the Tablas de Daimiel National Park

This park has suffered greatly from both natural and human causes. The drought years of the first decade of 2000 coupled with illegal water extraction (from as early as the 1970s) caused the levels of the wetland to lower dramatically and this in turn dried out the underlying peat bogs which then caught fire. The peat bogs are an important part of the wetlands as they act as a sealant stopping the water from being absorbed into the ground. UNESCO were at the point of removing the biosphere reserve status from the area and the situation almost caused the first National park to be stripped of its title in Spain.

However, at the same time as the plan to redirect water from the river Tagus was implemeted, the drought broke, the rains came and the wetlands were saved. The expanding water extinquished the peat bog fires and the recovery of the ecosystem began.

The laws covering water extraction in the area are now more tightly regulated so hopefully the habita will remain protected for many more years to come.

The Tablas de Daimiel are formed by the waters of two rivers of different nature. The water of the Gigüela river that comes from the Cabrejas moors in the Cuenca mountain range provides brackish (salty) waters, while the Guadiana river provides fresh sweet water.

The fresh water of the Guadiana favors the growth of reed marshes (Phragmites australis, Phragmites communis) while the brackish water of the Cigüela favors the growth of marsh vegetation, mainly the sedge swamp sawgrass (Cladium mariscus). In the shallower areas there are large groups of cattails (Typha sp), bulrush (Scirpus lacustris), saltmarsh bulrush (Scirpus maritimus ) and reeds (Juncus sp).

One of the most characteristic formations of the national park are the carophyte meadows which are made up of different species green algae (Chara hispida , Chara major , Chara canescens). The tamarix (Tamarix gallica) is the only tree species found within the wetland.

Among the sedentary fauna it is worth mentioning the river crab (Austropotamobius pallipes). Once very abundant and an important source of food and income for the families of Daimiel it has been harvested almost to extintion in the area and is also predated on by the introduced pike (Esox lucius).

Native species such as barbel (Barbus barbus ) and the European chub (Squalius cephalus) are also endagered but present in the area.

In spring and summer you can find amphibians and reptiles such as the tree frog (Hyla arborea), common frog (Rana perezi), common toad (Bufo bufo), salamander (Salamandra salamandra) and snakes like the viperine (Natrix maura) and grasssnake (Natrix natrix) .

This centre has plenty of information designed to help identify the birds and plants of the park, through photographic panels with information, aquariums, exhibition of animal and plant remains, etc. There is an audio visual room with a presentation of the area and the staff will help greatly.

The Molemocho Mill is located where the Guadiana River feeds into the wetland about 800 meters before reaching the main Visitor Center of the National Park (it is well signposted) and is well worth the visit!

This unique building is one of the oldest hydraulic flour mills in Castilla La Mancha. The exact date of its construction is unknown but Molemocho is mentioned in maps and registers as far back as 1575.

The fascinating exhibitions focus on the wetlands history and the human inhabitants of the area.