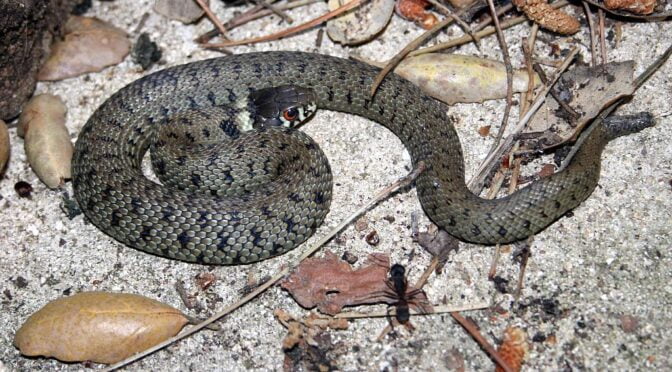 The grass snake has a well defined broad head, round eye and pupil and the iris orange or red. Adults can reach about 130cm in length, though are usually 70-95cm. The most common color is brown or dark green, with small dark spots. The young have a yellowish white collar edged with black, which may disappear entirely in adults. An aquatic species, though less so than the Viperine Snake (Natrix maura) and seen less frequently.

The other forms of Grass snake in Spain

Natrix helvetica helvetica (In Spanish Culebra de Collar Europea) is found in the Pyrenees. The Barred Grass snake has a body colour of grey-green and distinct banding along its flanks for the entire length of its body. It can grow to a length of over a metre. It was included within the grass snake species, Natrix natrix, until August 2017, when genetic analysis led to its reclassification as a separate species.

The Mediterranean Grass Necklace Snake (or the Red-eyed grass snake) (Natrix astreptophora). Again recently seperated from the common grass snake, you find this snake close to water sources helping to identify it by its habitat in the south of Spain. (It is not very abundant in any part of its distribution area). There is a good article about this species on the website of the Great Malaga Path: https://www.malaga.es/en/turismo/naturaleza/lis_cd-13130/culebra-de-collar-mediterranea-natrix-astreptophora-natrix-natrix-gran-senda-de-malaga

Identifying the differences in the three species in the field is near impossible unless you have excellent photographs or have a long time to study the specimen. But, for the two newer species, geographic position helps to rule in or out.

Generally prefering shrubby locations near water. Can be found in meadows, hedgerows and woodland along the sides of rivers and other water bodies. they are mainly diurnal with crepuscular activity during the hot summer months.

Feeding on amphibians, especially frogs, toads, their larvae and fish, grass snakes are strong swimmers and may be found close to rivers and streams. At distance and because they are in the water they are sometimes at first glanced confused with the viperine snake.

The mating period is April through June and a clutch of 12 to 28 eggs are laid 27 to 36 days after copulation. The eggs hatch after an incubation period of 42 to 71 days. Several females may lay eggs in the same place so sometimes a large number of juveniles can be seen in the same area. The young are about 18 centimetres long when they hatch and are immediately independent and self sufficient.

Similar species: The adults are similar to the Montpelier Snake (Malpolon monspeliensis) Note: The grass snake normally has an orange iris and the Montpelier snake has a yellow iris.